My first trip out to a convention to run Senshado games was at Arisia, a big science-fiction convention held here in Boston each January.  This is a con where a lot of hall-costuming is worn, so it was fitting to make up an appropriate cosplay to wear while running the Girls und Panzer games.  Since green is a good colour for me, Saunders it was.  It was a quick and easy outfit to put together, mostly with off the rack components.  The jacket just needed the collar colored with a fat brown Sharpie.  The patch is a stock 3″ star patch sewn onto a circle of brown felt.
The jacket is lined, and can be warm to wear indoors, so I’m currently working on an alternative for future cons an army green shirt also with a patch and a brown-Sharpied collar.  Just needs some ribbing material to put on the cuffs and waistband after shortening the shirt up.
The Ooarai container box is very solid and I love it.  They are pricey and the shipping from Japan is exorbitant; if you’re going to buy any, buy two — that at least makes the shipping per piece much less!

A hazard of running con games is that I often get too tied up in running the game and answering questions, that I forget to step back far enough to take pictures of the players, and not just the action on the table.  That happened at Arisia but fortunately, Cat Trzaskowski Photography was on site taking hall photos and got this nice one of the Ooarai players in action:

Here’s a few highlights of the table action:
Miho and Klara face off in a duel.  Klara will knock off Miho’s side schurzen, but then get KO’d in return.  (Hmm, the Ooarai player placed the katakana SFX tokens to mark movement and fire upside down, so they are reading backwards in this photo.)

Duck Team bravely tried to block the path of Nonna in the IS2, but without any stiffening from friends to assist with a double-block, Nonna just plowed them out of the way. 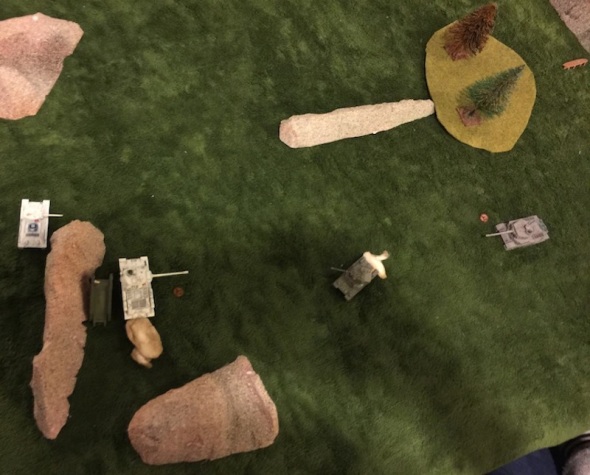 Operation Sneak On Pravda’s Flag almost worked.  Turtle and Hippo discover Pravda’s flag tank hiding in the back woods.  After a prolonged fight, another T-34 erupts from the woods right into the path of the shell that was about to KO the flag tank.  The flag tank then lands a disabling shot on Hippo to dash Ooarai’s hopes for this match.

In the end, prolonged fire finally takes out Ooarai’s flag tank, Team Leopon in the small woods in the center, and the match goes to Pravda.

The next day saw a big double-flag tank match between the combined teams of Ooarai and Jatkosota vs. Pravda and Kuromoromini.  While the Kuromoromini player was excited to field all the big tanks, in the end it was Sangou in their lightest tank, the recon Panzer III on the hill, that took out both of the opposing flag tanks to win the day for their combined team.

And then on to TotalCon in February.  This is primarily a boardgame and role playing game convention, but there is a small miniatures area.
The first game ended pretty quickly with a sudden victory for St. Gloriana’s over Jatkosota.  Here in the opening move, Gloriana’s main column moves up the road into the village.  Cranberry in the Crusader will remain here in the woods when the column pulls off to the left and up the hill.  Following the column move, Mika in the BT-42 flag tank will pull away from the far side of the hill to dash around behind the village.  But before it can make it behind the first cottage, Cranberry lets loose a lucky snapshot so well timed that it lands squarely despite Mika’s ability to sense danger. 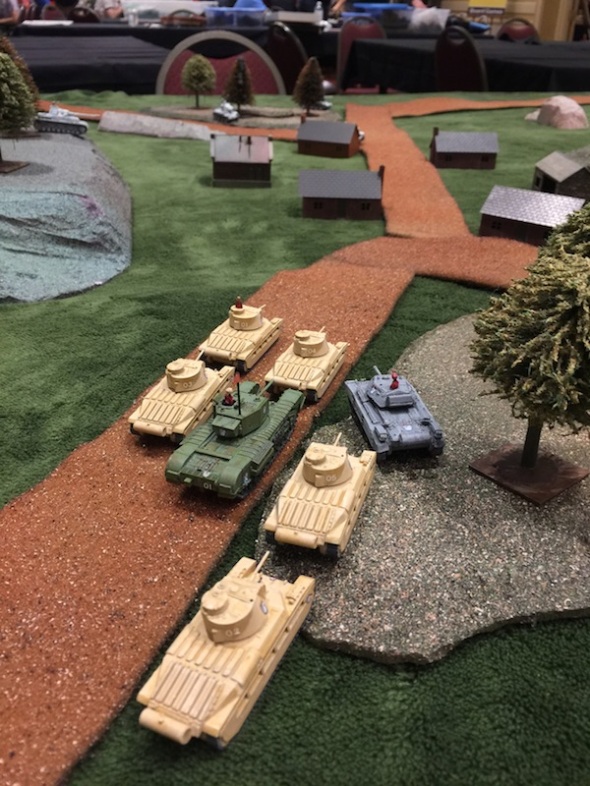 The next battle pitted St. Gloriana’s vs. Pravda.  Gloriana’s flag tank column rolled forward (without spilling a drop!), as Pravda’s flag tank group hightailed around the field in a big circle.  Pravda was hunting for the outlying pickets of Crusaders and the Cromwell and not wanting a direct showdown between the flag tanks.  Alas for them, the sneaky elusive Crusaders kept backing out of sight and disappearing amongst the trees, only to emerge again later in completely unexpected locations.

Cromwell in the village, sneaky Crusaders in the center woods now.  But wait, sneaky T-34’s reveal their hidden position to cover the rear of their flag group and begin pressing on Darjeeling.  Nonna’s hidden position led to a mishap of sliding into loose rubble up in the ravines.  Also in the ravines, Vanilla’s brave dash to take on the KV-2 on the high ridge came to a quick end.  KV-2 on the high ridge?  In the opening deployment, a T-34 must have acted as a ramp to let it drive up there into a commanding overwatch position. 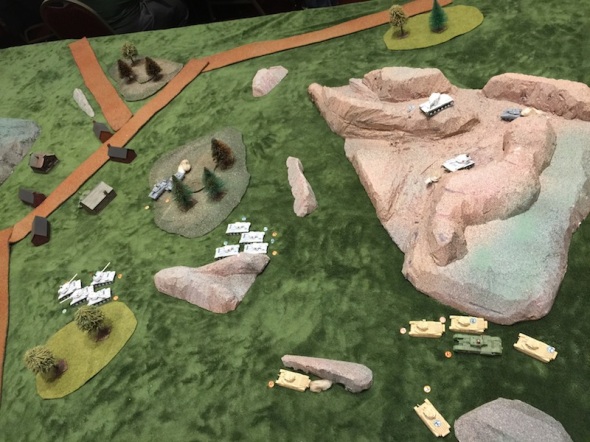 With cries of “Ura!” Pravda’s flag group sweeps through the village exchanging volleys of fire with the First Years in the Cromwell.  All to no effect — the First Years still hold the town as the T-34’s gallop on to drive the Crusaders from the woods.  Rosehip is still strugglig with a disabled Crusader, but ever sneaky Cranberry disappears back into the trees again, only to pop up behind Pravda, but fails to land any shots on the rear of their flag tank.  Meanwhile, the Cromwell rounding the spit of rock in the center takes out the KV-2 on the high ridge.  Whilst around Darjeeling, Pravda’s rear guard rushes in for a point blank slug-fest. 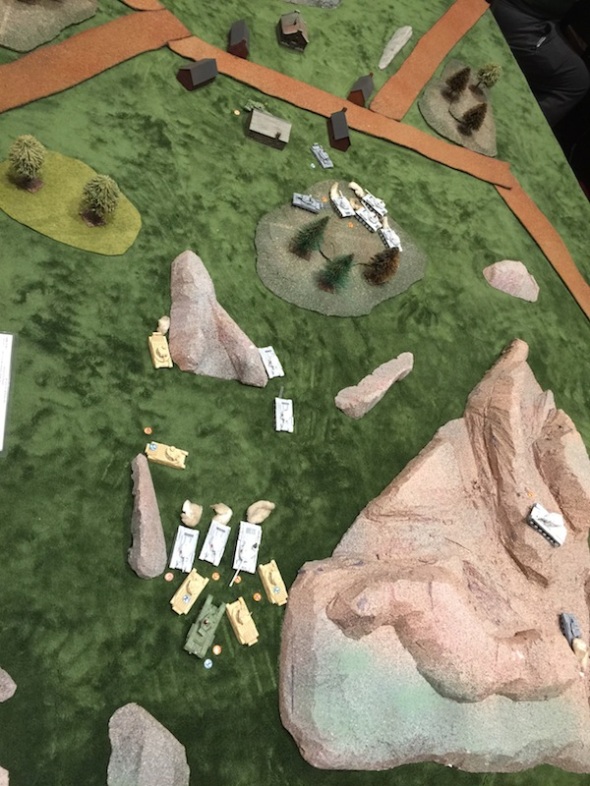 Katyusha continues with the great sweep through the woods and charges on towards Darjeeling, but Crusaders once out of sight just keeping popping up again in all of the worst locations.   And the plucky Cromwell is just racing along through the open to catch up with the battle.  Rosehip, with her treads repaired at last, and Cranberry rush out of the hills.  Cranberry lands the Knock Out shot on Katyusha’s flag tank to win the day for St. Gloriana’s.  Though to the dismay of Darjeeling, there is a lot of spilled tea to clean up inside those galloping Crusaders.
Also note that before this convention, I had spray painted the backs of the SFX tokens white so that the stand out better against the dark green micro-fleece blanket, and players don’t place them upside down anymore.  (I’ll do a separate full post on making the tokens.)

Packing up the teams — Plano 3610 boxes are ideal for holding most teams.  The boxes are lined with sheets of craft foam from the local big-box craft store.  1 large sheet is plenty to line each box.  I picked up sheets in all different colours so I can quickly identify each box when they are closed.  Rolls of bubble-wrap keep all the tanks snugly safe during transport.

I found the larger Plano 3700 was better for Kuromoromine’s large kampfgruppe, and there is still room in the box for their JagdPanther and JagdTiger.  Zvezda should be releasing those plastic kits sometime this year.  The 3700 gets packed into the Ooarai container box along with terrain bits.

The smaller boxes all fit nicely in a beer-cooler bag for the travelling:

2 thoughts on “Senshado at Arisia & TotalCon, with Saunders Cosplay”