Maginot is one of the minor schools on the tournament roster in the anime series, but not shown onscreen.  However, they do feature in their own 2-volume spin-off manga  “Gekitou! Maginot-sen desu!!” (It’s a fierce fight: the Maginot battle!).  The manga covers a training battle between Maginot and Ooarai just before the big tournament.

There is a lot of artistic leeway in painting the tanks.  In the body of the black and white manga, their tanks are mostly shown in solid colours, except for the one Char B1 which is used in the five-on-five match.  The colour back cover of Volume 2 shows a handful of tanks all in assorted camouflage, and a frontispiece colour illustation shows another side of a Somua S35.  I opted to paint the patterns shown on the back cover, the other Char B1 in three-colour camo (more historically typical than the four-colour shades shown in the black and white drawings, and the remaining tanks of their ten tank roster in solid colours.  The school markings and individual “Aces” markings are based on from the black and white body of the text.

The miniatures are all from Peter Pig, and only needed some minimal work.

The Char B1’s all came with stowage molded onto the back facing, so I carved all of that off to allow for placing the Ace markings: 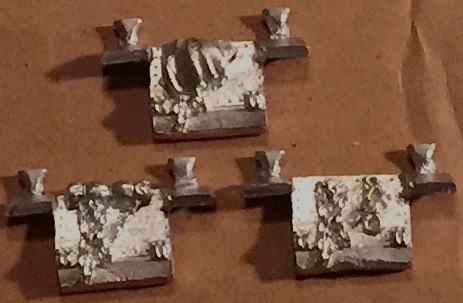 Peter Pig’s usual packaging only offers the Renault R35 tank.  Maginot has upgraded theirs with the later turret to make them modifié 1939 models.  Fortunately, Peter Pig is a friendly and helpful little company, and they were quite willing to sell a stash of extra turrets from their Hotchkiss H39 on request.

The posts on all the turrets sat a little loosely in the opening of their chassis.  So I added plastic tubing to fit more snugly, and extended them longer so they aren’t too likely to tip out.  And filled the tubes with BB’s for more weight to keep them seated nicely.

French tanks don’t have cupola hatches on top (pre-war cost-saving!).  If the commander wants to put their head out, they have to open up the rear escape hatch in the turret and sit out on that.  When I get around to making crew figures for these tanks, I’ll make figures sitting on a hatch.  To prep for that, I put magnets sideways up against the inside of the hatch.  Drilled a hole and then carved it out wide enough to glue in the magnet on each one.  Shown here with a small magnet held in place outside for a polarity check:

Also did the usual drilling 3/64″ holes in each turret top to hold 1/32″ brass rod flagpoles.

The only other bit of extra work was opening up the spaces in the framework of the FT17 tailskids.  Drilled holes through the framework, and then trimmed up the openings with an XActo.  Then on to the painting and decalling!

The school markings are from Company B.  One package each of both their 28mm and 15mm sheets provided ample markings.  Usual caveat — these are fragile handle with extreme care.  And as usual, I brightened them up a bit after they set with blue and a red .005 Micron Art pens.  The Aces markings are from Battlefront’s 15mm French Decal set; these had nice solid colours, but I did outline them with a .005 black pen after they were set to help them stand out more.

A trio of FT-17 with open-air tailskids:

The big brace of Char B1 bis; Diamonds Bleu commanded by Galette:

The back cover five:

Senshado at Arisia & TotalCon, with Saunders Cosplay »
« Jatkosota With Conversions