A major force in the Hundred Years War as a major trading partner with England.

15mm figures, I’m not entirely sure what most of them are — bought the core of the army cheap off EBay.  The purchase included 12 stands for the (c) list only; extra Pike options not included.  I got the army super cheap because of the basic block painting, and the fact that the original pose of the pike figures are horrible; so there wasn’t any competition bidding for this, but it’s just the sort of fixer-upper bargain I go looking for!

While the figures look like very nice poses of actual pike drill, you can’t actually get opposing stands into base to base contact with pikes at such a low angle!  Fortunately, that was easy to fix.  The pikes were cast separately, and came out of the hands easily enough.  Then I bent the arms to hold the pikes much more upright, and added brass pikes instead of the original lead ones.  It took a day or two of painting to add more colours, details, and highlights to the paint jobs on all the figures.

The original army as it arrived: 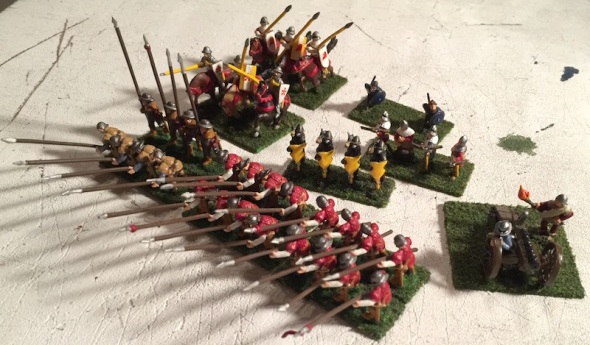 I painted up and added enough stands to field the earlier (a) and (b) lists as well.  I didn’t bother adding any extra optional Pike stands, 6 is plenty.  The Artillery stand that came with the army was a late period gun, I replaced that with an Organ Gun by Essex.  The crew figures for the organ gun and the two stands of 3 Blade (plançons) were all converted from an extra pack of Essex halberdiers I had on hand.  The White Hoods of the Warband stand are mostly Splintered Light Miniatures, and a Baueda or two.

Scratchbuilt a camp suitable for this army that can also function as a generic medieval camp for many other armies.  Crossbow figure is Old Glory, cart and ox (tethered to the wheel with a strand of emboidery floss) are Essex.  Stone wall made from Sculpy and the stakes from round toothpicks: 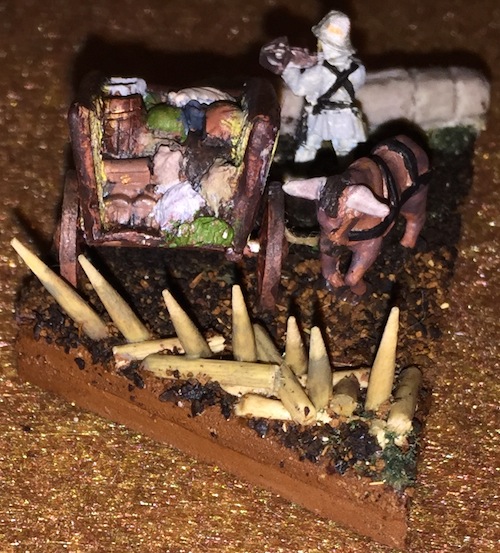 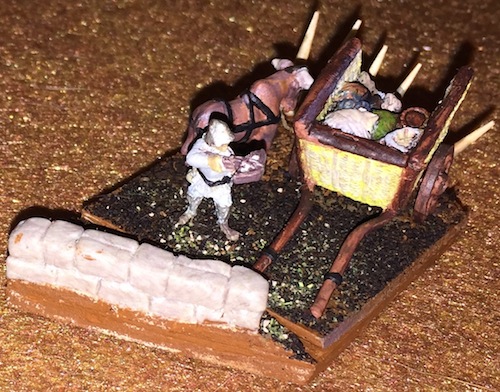 And the whole army arrayed: