Between events at Anime Boston at the start of April, and Huzzah (great miniatures convention up in Portland, Maine) in May, I polished up how to handle a faster-playing senshado match with lots of players and flag tanks.  Added fun new miniatures and rules for tank recovery vehicles at Huzzah too.

The games start at both conventions began with players choosing their teams.  Everyone rolled dice.  High roll got the first pick of which school they wanted.  Working down the rolls, each other player got choice of school and which side they wanted to be on, with an equal number of schools on each side.  As game master, I would join in with a school and last pick if needed to make an even number.

The match at Anime Boston featured a combined team of Kuromoromine, St. Gloriana, and Saunders versus Jatkosota, Ooarai, and Pravda.

Close-up of the opening engagement, lots of sneaky tank action at the top of the ravine with many a tank popping out of hiding just around all the corners of the escarpment: 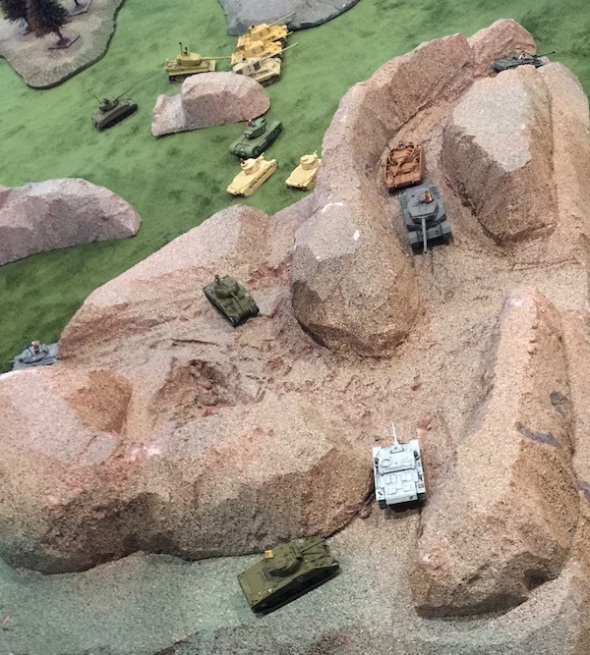 As the action heats up, Jatkosota’s Sturmi makes a jump off the ledge to clear a path so Ooarai’s column can advance into the battle.  The game turn ended with Sturmi still in mid-air:

In the center,Kuromoromine’s and Saunder’s flag tanks slowly roll forward behind a solid shield wall, and take out Jatkosota’s flag T-34 as it tried to make a desperate dash over to the flank.  A Matilda rolls the flank of the ravine, catching sight of Hippo team before they could make a sneaky re-deployment:

Grand finale, in a tumultuous final game turn, Nonna in Pravda’s flag tank is taken out on the far flank by Maho in the Tiger I, Miho takes out Darjeeling in St. Gloriana’s flag Churchill, and firstyears in a sneaky Sherman in the back corner of the ravine takes out Oorai’s flag tank of team Leopon.  Kuromoromine’s and Saunders’ flag tanks survive undamaged and their combined team is the overall winner.  Victory is declared while poor Sturmi is still coasting through the air in a long jump!

In all of my games to date, we have largely been forgetting to bother with the original rules for removing disabled tanks.  I had been wanting to try out a more entertaining system using actual models of tank recovery vehicles.  Models acquired from Arctic Skunk on Shapeways, and painted in time for Huzzah.  The new rules are that a recovery vehicle is placed at a KO’d tank during the Repair Phase if there is space for it that does not obstruct likely lines of fire and movement, and then both are removed during the Repair Phase of the following turn.  This proved easy for everyone to remember because it was a fun addition to the tabletop!

Because of the size of these vehicles, they are only offered in White Strong Flexible, which prints with a pebbly surface.  Mike would have made them available in the smoother Fine Ultra Detail on request, but the cost would have been exorbitant.  I was happy to buy the FUD versions.  Even after scraping down the surfaces with an X-Acto knife, the surface is still pretty grainy.  While the grain shows up greatly in the close-up photos, it is not noticeable at all on the tabletop.

The Scammel Tank Transporter is seen in Episode 4 of the series: 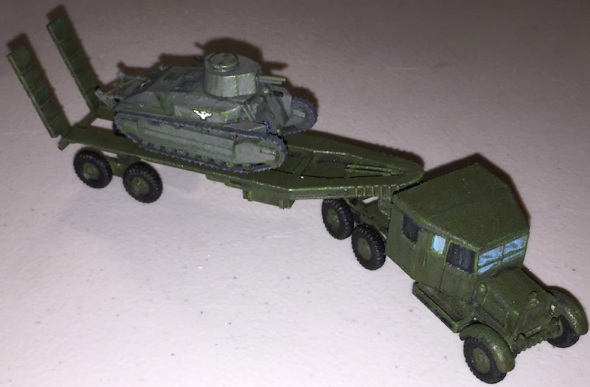 The M25 Dragon Wagon is seen in Episode 5 — well a small operational model is seen delivering pastries.  The pastry deliverator is A-31:

On to Huzzah!  While the game at AB was quite enjoyable for all, I felt that multi-player game-play could be sped up more.  The initiative system of alternating each side moving one tank or formation at a time took a little bit longer as each team of players decided who would take each move.  For Huzzah, each player had 5 tanks, and several movements were combined at once.  I was very happy with how that helped the flow of the game.  I will use this system in all future multi-player games.

Movements still alternated between each team of players.  When it is a team’s turn to move, each player in that team moves one of their tanks or formations simultaneously.  In the Fire Phase, shooting is still resolved one tank at a time by caliber/initiative.

The Huzzah match featured a combined team of Jatkosota, St. Gloriana, and Saunders versus Maginot, Ooarai, and Pravda.

The engagement has begun, and players ponder their next moves: 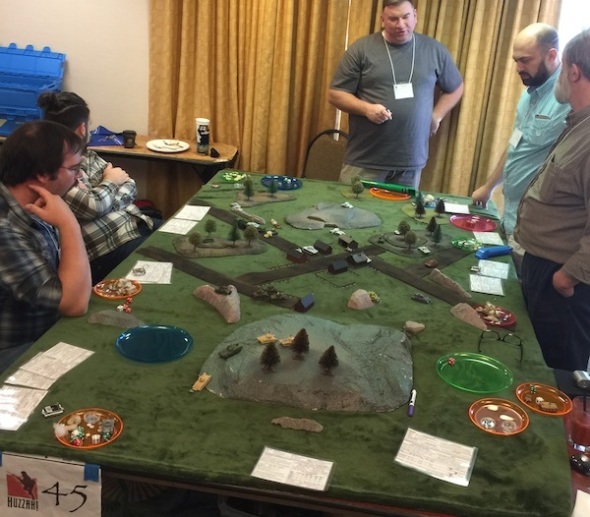 Sneaky Turtle team and small Maginot tanks are popping up everywhere.  Sturmi has been KO’d and loaded on the M25: 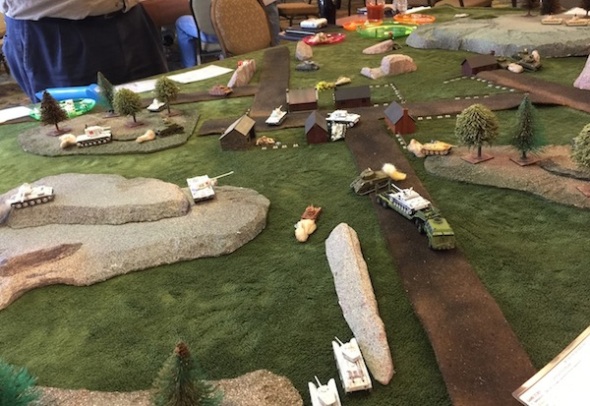 Next up is a hard turn for Ooarai when they loose both Turtle and Anglerfish teams:

Removal of tanks in the early and middle parts of the game did unclog movement/firing lanes that were used later.  So having recovery rules which we remembered to use were indeed helpful.

As I was involved playing in this match, I did not manage to take pictures of the finale.  While this was nominally a 3-Flag match, in the end it became an annihilation battle!  Both sides had knocked out two of the opposing flag tanks.  The Pravda flag T-34/76 remained, supported by a strong force of Pravda and remnants of Maginot and Kuromoromine.  Against them were but two tanks: Alisa in Saunder’s flag M4(76) backed by a sole Matilda who both made a headlong dash to get at Pravda’s flag!  Both managed to get shots on the flag; but moving in at high speed, they missed.  Then the net closed in.  The Matilda was KO’d.  Alisa, boxed in close on all sides and unable to move to get another shot at the opposing flag tank, struck colours and surrendered to Katyusha.  A lively fight right up until the end!