Zeds and The Flying Shoebox

Continuing to paint up the Scum & Villainy forces, next up are the first (3) Z-95 Headhunters and the first YV-666.  The Houndstooth titled ship version of the YV allows for a Z-95 to be carried as a ship’s pup escape vehicle.

Running with the ship’s pup theme, I painted this trio of Zeds in basic Sopwith Pup colours: green on the top surfaces and unbleached linen on the bottom.  The actual paints used were the same as on the first batch of Scum Interceptors and Kihraxzes — Model Master’s Green Zinc Chromate and Afrika Braun; marking colours in Russian Marker Red, Napoleonic Violet, and Insignia Red.  Engine glow and laser tips are a base of white and then Testor’s Fluorescent Red.  Panel lines are inked with a .005 Micron Art pen.

I had used the Green Zinc Chromate on top of the original factory green paint on the other ships to brighten them up a bit.  Painting the Zinc over the base light grey of the Zeds, the green came out much brighter.  So I dulled it down here with a light dry-brushing of French Chestnut.

I also physically modified one of the Zeds to be the Ship’s Pup.  On this one, I shortened the nose by carving it down, and shortened the exhaust nozzles by removing the middle section — the shortening fits the styling of the naval carrier version of the Sopwith Pup.  And to make a secure landing on the deck of the YV, I also carved a notch in the forward underside, and also carved down sharp sides on the engine block — both of these mods help to lock the model into corresponding carved mods on the landing deck of the Houndstooth.  And the most notable mod was cutting the wings off with a dovetail cut, and then refitting them in a downward position (with a bit of bevelling at the joint) — this gives a much tidier docking shape.

Here are photos of the mods to the bottom of the Pup that match the landing dock on the YV:

The YV-666, aka The Flying Shoebox, clearly escaped from a pixelated video game universe.  I did a few mods on this model.  the front upper deck got a couple of notches carved into it to help hold the Ship’s Pup in  place when docked.  I drilled a hole in the deck to hold the flight peg of the Pup so it can just slide in.  And for times when the ship is flown without the Pup, I took a small turret from a 1/700 scale ship model and glued it on a flight peg so that it could also be dropped into the hole.

The really fun mod was making the maneuver fins articulate.  The whole rear engine section came off after a few minutes of wiggling and tugging.  I’m leaving this piece unglued for ease of storage.  It slides back on very securely for gameplay.  The fins however did not wiggle off, I had to cut them with the X-Acto knife.  While cutting them off, the big servos under the fins broke off.

I took the opportunity to re-position the servos slightly when I re-glued them back.  To articulate the fins, I drill a hole through the engine core and into both fins, and fitted a brass tube through the fuselage.  The servo piece has (2) plastic pegs inside that connect to the fin.  The holes I drilled in the fins pass completely through one edge of the forward pin, and halfway into the rear pin — this helps hold the fin snugly in place when it’s slid onto the brass rod.   Each fin can be maneuvered independently just by rolling them into position.

Since I’m not too fond of The Flying Shoebox look of this design, I wanted to repaint it in something other than the factory brown.  I masked off the gray engine areas and the bottom sections of the hull and the top nose which would be brush painted with Insignia Red,   I finally selected my can of Testor’s Fifties Pink to spray the base coat.  I like it better now as sort of a Mary Kay Slave Trader than a plain old brown Shoebox =^,^=

The light glow on this ship was done with a base of white paint and then Testor’s clear traffic light colours.  Yellow for what I’m guessing are engine exhaust on the rear of the body, and blue maneuver engines.  There are two tiny bumps on the upper deck, I painted one in clear red and the other in clear green as docking beacons, and also a pair of clear green running lights on the very back end.  Weapon tips are Fluorescent Red.
Here are the various parts after painting:

A close-up of the landing dock showing the notches carved in to help lock the Pup in place when docked.  Right behind the hole is a well carved to hold the Pup’s engine block.  At the back edge of the raised nose is a carved slope to hold the nose of the Pup.  The area is heavily weathered for the Pup’s exhaust streaks from launchings and landings:

And a trio of pix with the laser turret in place: fins down for diving, fins banked into a turn, and fins set to full stop: 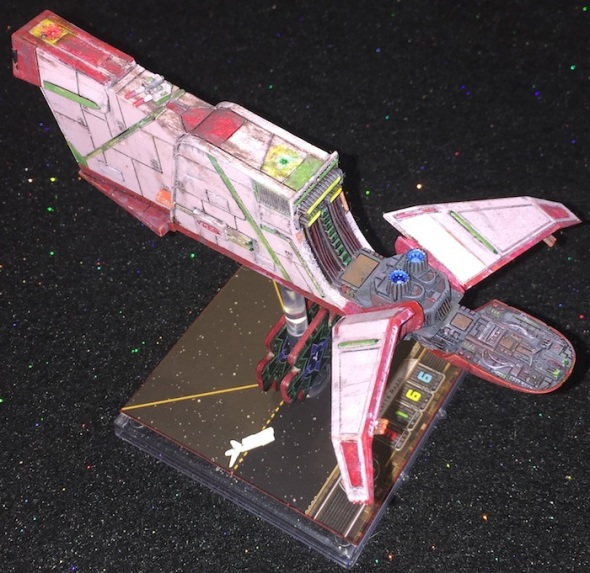 2 thoughts on “Zeds and The Flying Shoebox”