The first batch of Wave 2 expansion models have landed here at GoblinHall, and like all the X_Wing models here are getting some personalised re-painting for variety and extra detail.

Again, these were done with a variety of of Model Masters and Testors paints brushed on right over the original.  The blue engine glow was done as before: a base of White, then Neon Blue around the edges.

The Firespray and A-Wings got a nice warm yellow engine glow.  Since I don’t have a Neon Yellow paint, this took a little more layering: base coat of thin White, Russian Marker Yellow around the outer 2/3’s, then Deep Yellow around the outer 1/3, and a small dot of solid White in the center.  After that had dried, then a finishing coat of clear Turn Signal Metallic Amber over all but the center white dot to give it a deep shiny yellow luster.

The Tie Interceptors were painted to match the Wave 1 TIE repaints: dry-brushed with Russian Topside Blue over the grey areas. Touch-up and highlighting on the wing panels with burnt umber.

When painting these, the tips of the wing lasers weren’t painted and that led me to noticed something that had escaped my attention before.  All the TIE models in this game come with orange dots painted on tip of the chin lasers.  But wait — TIE lasers fire green blasts!  So the chin and wing laser tips got a base of white, and then a drop of Neon Green.  Also greened up the TIE Fighters and Advanced at the same time.

The big ships of this expansion just got some minor other touch ups.

The Millenium Falcon got the scattering of red panels expanded to slightly larger areas, and a slightly brighter shade of dark red – British Crimson.  The whole ship got a bit more weathering, Burnt Umber on the sooty areas, and a variety of shades of light greys overall, with a final dry brushing of French Light Blue Gray to brighten it all up more than the factory finish.  Also highlighted the lasers and sensor dish with some Chrome Silver, and tipped the lasers with Flourescent Red.  The whole ship is now properly dingy but looks heroicly lit at the same time!

For the Firespray, overpainted the dark grey panels, and a few more as well, with Pale Green.  Also dappled the ruddy areas with this green.  Touched up the black lining between the panels as needed with a .005 Micron Art pen. 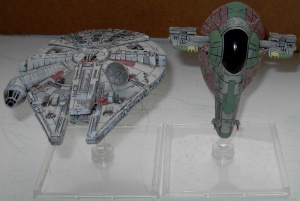 The A-Wings got the most involved re-painting of any ships yet.  They needed a new personal squadron colour.  And so the dark red stock colour needed to all be covered with a white base first.  I still wanted to do these as a red squadron — just a different red squadron than all the other A-Wings in the world.  Opted for a brighter and orangier red than used on the Falcon — Rot RLM 23.  And like the X-Wing and Y-Wing squadrons, this too is part of my Gold Task Force with Russian Marker Yellow on the nose and engine rings.  Then to individualise each of the ships, overpainted a number of the grey and white panels with a variety of other greys and whites, and a bit of final dry brushing with French Light Blue Gray for simultaneous weathering and lightening.  The laser cannons all got tipped with a drop of white and then after that dried a drop of Flourescent Red, then after that dried a drop of clear Turn Signal Metallic Amber to give it a deep luster and somewhat orangey glow.