A few weeks at the club, we got to run the first few test run games of Girls und Panzer.  Quick synopsis — they were a blast and really captured the flavour of the anime very nicely!  Can’t wait to play more, and I will definitely be ploughing ahead to do this game up in style for convention use next season.

The week before the game, I made up a set of terrain specifically for senshado battles.  These are made out of pink insulation foam cut to shape with a knife, then heat sealed and final shaping down with a hot wire.  Spray painted with Rustoleum stone-texture spray paints.  Applied in light coats (outside for ventilation!), this can be sprayed directly on the foam, the paint will slightly melt and pit the foam, adding more texture.  The rocky ravine is inspired by the terrain from the training match between Ooarai and St. Gloriana.  The large hilltop from the tournament match between Ooarai and Saunders. 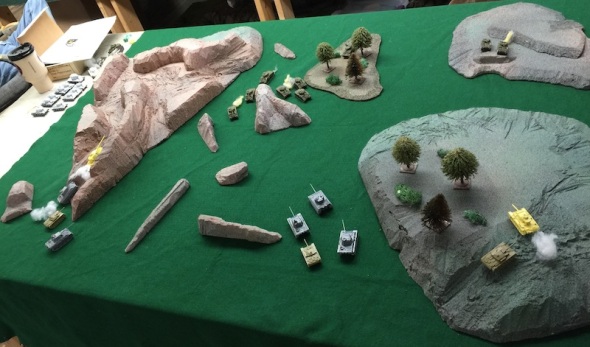 View from Erika’s flanking force winding up through the ravine: 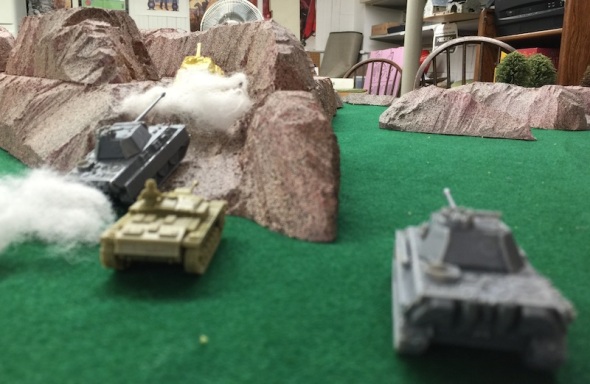 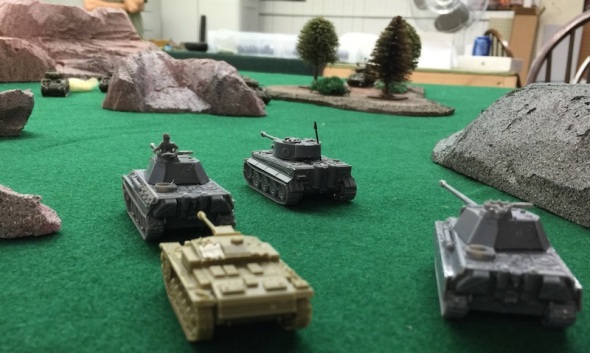 Maho in the Tiger I flag tank leads the assualt up the middle.  Pushing into a suprise, she finds Naomi’s Firefly was in fact lurking with the main column.  But Naomi’s sneaky deployment and snap shot bounces off the front glacis of the Tiger I.  Very nearly a quick finish to the match: 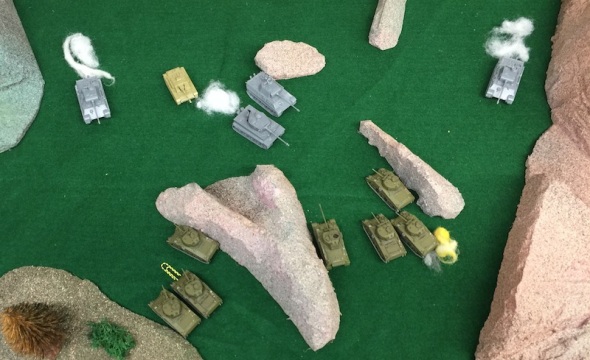 Meanwhile, the flanking forces on the hills begin duelling.  Kei and an accompanying Sherman open up on the Pz.III and Sturmgeschutz across the valley:

Erika’s TIger II is slow winding through the pass, but the dust cloud of their movement warns Saunders that time is pressing: 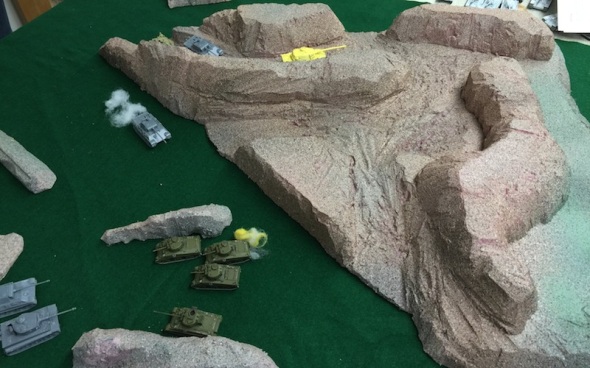 First KO!  Kei takes out the recon panzer, the StuG will shortly disengage and turn into the woods to provide more direct covering fire for their main force down below:

But that leaves Kei free to turn fire on the exposed flanks of the Kuromoromine main force, and securing the safety of Alisa in the M4A1 flag tank for now: 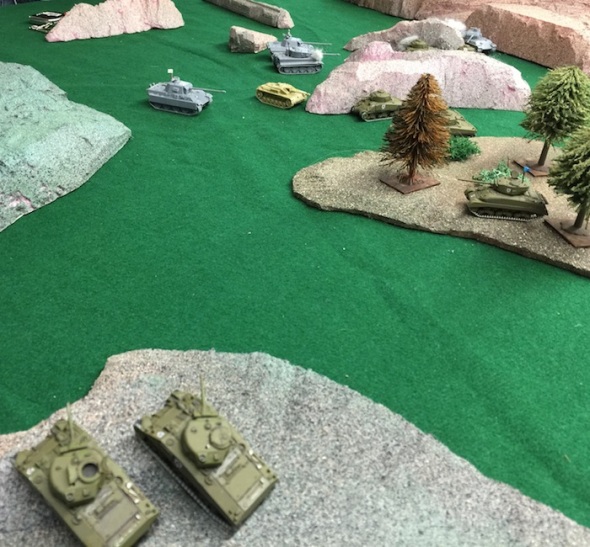 But Black Forest Peak’s envelopment finally wraps around, main force to the front and Panther in the backfield takes out the Firefly and another M4: 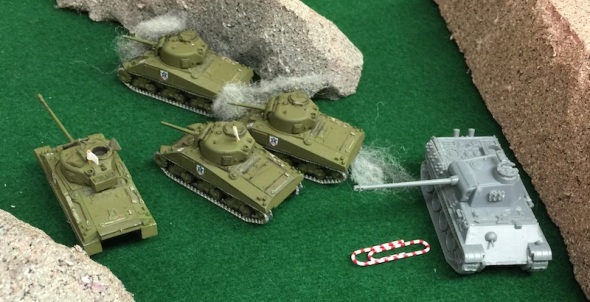 Erika’s column has finally wound through the rocky pass, while Saunders is also breaking through on the other side.  Shells are raining off the thick skin of the flag Tiger, but both Maho and the accompanying Panther have their tracks disabled, pinning them in place: 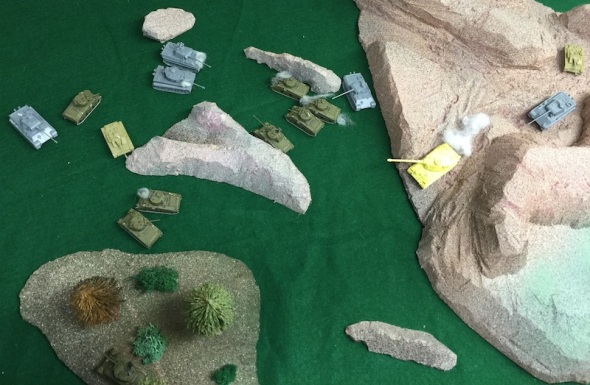 And Erika leads the charge straight on towards Alisa to quickly decide the battle: 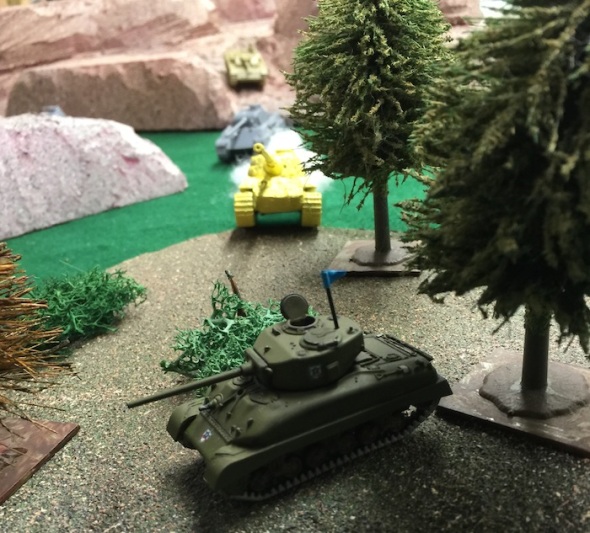 Alisa runs fast up and over the far hill, with her own flanking force in place to provide covering fire.  Erika takes out one flank M4, but Kei skillfully reverses, spins, and charges right into the opposing column.  Scraping fenders with the mighty King Tiger, she gets under it’s barrel and safe from the big 88 while taking flank shots against the StuG:

In the center, 2 M4’s have closed in behind Maho’s disabled Tiger.  Presenting their front armour to the covering fire from the StuG on the hill, they finally KO Kuromoromine’s flag tank to win the match: 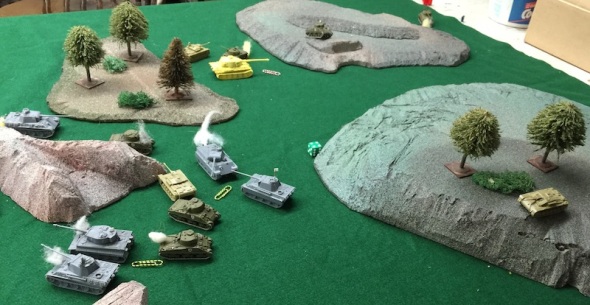 Next up — Pravda!
The Pravda tanks are all painted, but their decals hadn’t arrived yet.  Terrain is slightly re-arranged from the first match.

Enter Mission, closely reminiscent of the opening of the first match; Saunder’s M4 flag tank group heads for the cover of the center woods.  Nonna in Pravda’s flag tank IS2 comes up the center valley: 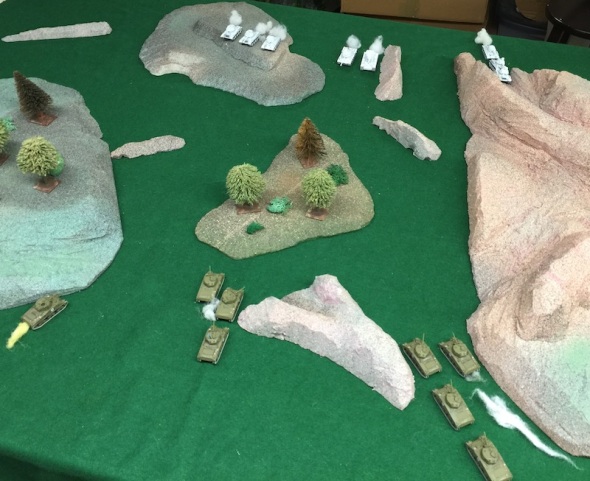 Ura! — battle is engaged quickly with Pravda flanking forces galloping in.  Dustclouds rising above the ravine show their T-34’s advancing much more quickly than the King Tiger could.  With two pincers closing fast, the M4 flag tank breaks and runs for cover behind the hill, scooting safely around Kei who takes an immobilising hit.  Meanwhile, Alisa’s wiretapping has allowed her and Naomi to sneakily deploy both their M4A1 and Firefly in the woods to hit Pravda’s flankers by surprise.  But wait, sneaky T-34’s also lurk in the woods in a game of spy vs. spy: 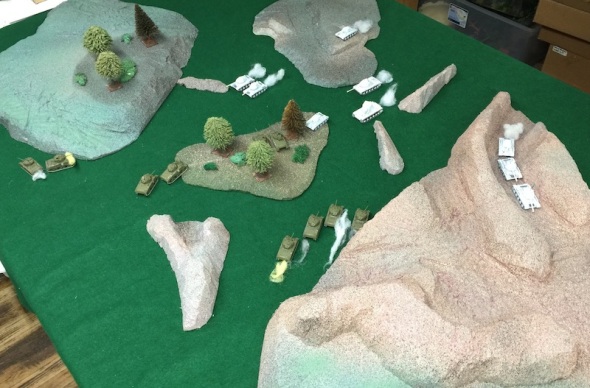 M4 flag tank scoots to safety while Pravda’s can be seen in the distance boldly advancing straight up into the fray: 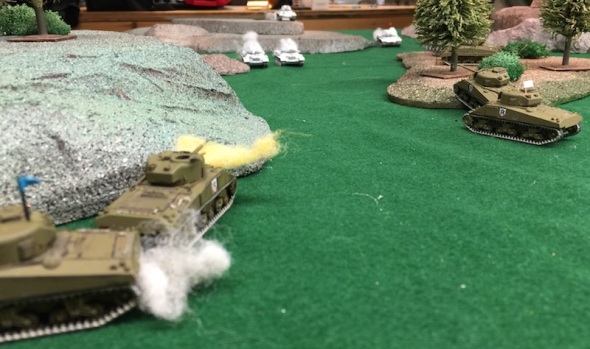 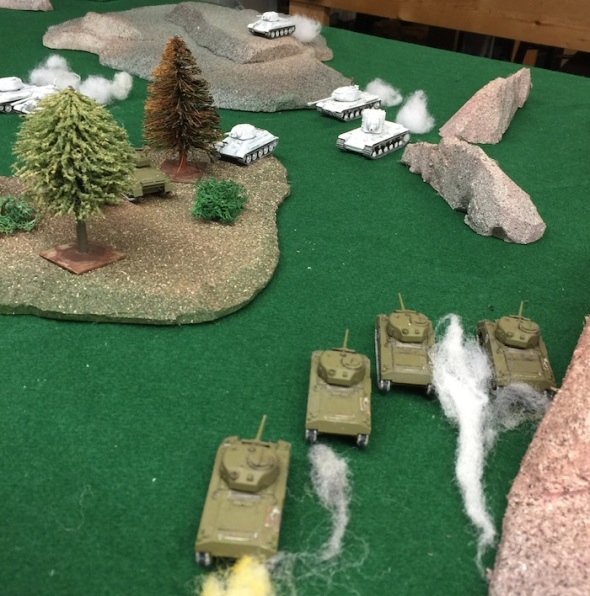 Then all the sneakers engage in the woods while an intrepid M4 (alas with the worst gunner on the team) swings wide against the IS2:

The situation becomes desperate for everyone as T34’s come bursting out of the ravine and M4’s burst through the Pravda line.  In an exchange that could have decided the match, Naomi loses the duel against Nonna:

Slowly retreating and taking down M4 and M4A1, Nonna is finally engulfed in a barrage from both sides and the match goes to Saunders: 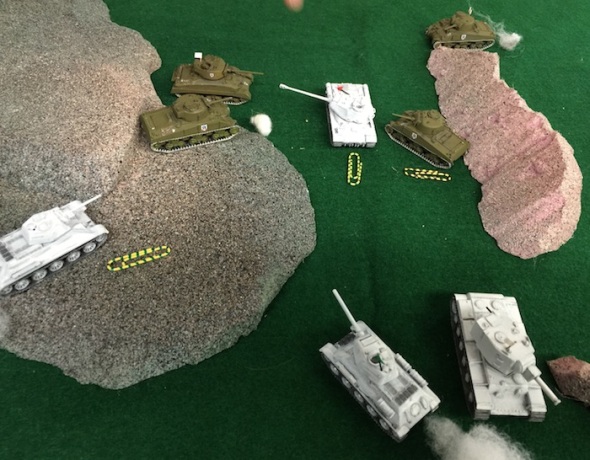 This was senshado!  Final bows were made to worthy opponents for good matches.  We shall all meet again!