Company B has fortuitously just started releasing 15mm pop culture decals for Girls und Panzer — and some of their 28mm ones are useful too for tanks that use somewhat larger images.  The first 15mm sets they released are for Saunders, Kuromoromine, and Ooarai. plus mascot images for Ooarai.  Others have just been released at the time of this writing, and I will be ordering those very shortly!

Each sheet has a variety of sizes of the school’s insignia. The only downside of these decals is that the sizes have been laid out in the wrong proportions.  For building senshado teams as seen in the anime, you will want more of the large sized decals than the small.  Here are the first wave of sheets next to Plastic Soldier Company’s Sherman, Panther, Tiger, and Zvezda’s Pz.38(t) {they have a limited quantity of the extra Anglerfish sheet shown}:

For Saunders, all of their welded-hull Shermans use 2 of the large image, one on each side of the hull, and a medium one on the left front; their lone cast-hull M4A1 76mm uses 3 mediums.  3 sheets will cover a Saunders team of 10 with 9 welded-hull and 1 cast-hull tank as seen on screen.

For Kuromoromine, the Panther, and most all of their tanks use 2 of the large image; the lone Tiger I uses 2 of the small on the rear sides of the hull, I’ve since scraped away the towing cables seen on left side in this photo to make room for the insignia (I might be able to squeeze in the mediums instead with careful cutting the tops and bottoms very closely); and their lone Pz.III J uses 3 of the small.  3 sheets will cover a team of 10 tanks that include Maho’s Tiger and the recon Pz.III.  6 sheets will cover the full team of 20 they use in the finals of the big tournament.
*Edit, update 31 October, 2016*
In the Tankathlon match in the manga Ribbon Warrior 5, Black Forest fields (12) Pz.II F with markings on each side of the turret against Bonple. The small decals on the 15mm sheet fit the Zvezda Pz.II. 2 sheets will cover all of them.

For Ooarai, they do use all 4 sizes on their sheet, the 38(t) uses 3 of the tiniest ones.  The other tanks use a motley variety of the other sizes.  2 sheets will fill out their full roster with optional upgraded versions of their tanks.  Except for the Hetzer, if you want to do a proper extra large image on the front hull, you will need to get one of their 28mm decal sheets.  The mascot images are all good sizes.  I’ll use the larger Anglerfish from the extra sheet for the hull schurzen on their late model upgrade.

All the excess small and medium sized images would be great for anyone modelling in 10mm.

The decals are very thin, which is a very good thing for the final look of the model.  But they are also very fragile, so handle with extreme care so they don’t break up when sliding them into position.  When I cut my images from the sheet, I left a small border of decal film around the outer edges — I use the tip of an XActo knife on that border to gently grab the decal and slide it into position.  I worked 2 decals at a time, putting a tiny drop of water on top of each one with my finger tip.  It was ready to slide in about 10 seconds or so.  And I moistened the area on the model with a light brushing of Solvaset before moving the decal into final position.

The first team I have decalled is Saunders.  After the decals had all set, I punched up the colour a little bit on the red banner with a .005 red Micron Art pen, and also touched up a few minor tears in the stars with a blue .005 Micron Art pen.  Then sprayed the models with 2 coats of Testor’s Dullcote for protection.  And after the Dullcote had dried, touched up a few minor tears in the white shield with flat white paint.  I didn’t want to risk painting on the decal til after the varnish.

Veterans Of Their Trade — The Sherman Corps!

I went with Plastic Soldier Company tanks for this team.  Their M4A4 kit comes the closest of their models to representing the hull detail of the M4’s seen on screen, and also include optional parts for Naomi’s Firefly.  PSC also sells single sprues, I got one of those for the M4A1 76mm plus 2 platoon boxes of the M4A4 complete the team. 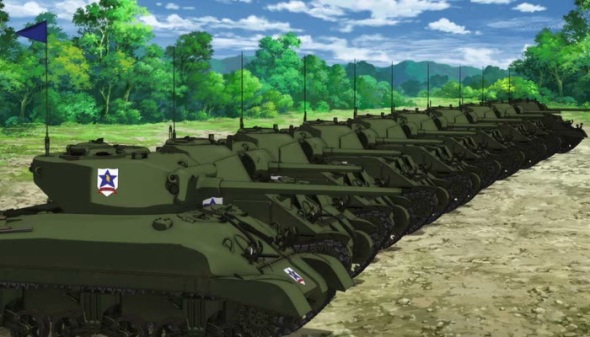 On the table (the olive drab paint came out a bit brown in the photos, they are greener in real life):

All of the tanks have a magnet glued under the commander’s hatch so magnetised figures can be placed on them.  The tanks for the personality figures have open hatches and a magnet inside the well.  I’m still awaiting figures.  Company B will be releasing some personality figures shortly.  And I also have a bunch of Preiser TT 1/120 scale figures on special order, and am waiting for those to come through, they should be a perfect size for modding into 1/100 anime school girls.

I drilled a small hole in each turret to hold a 1/32″ brass wire flagpole.  Originally, I drilled a 1/32″ hole for a nice snug fit.  But then right before my first game, I made my saving throw and realised that after painting and varnishing, the flagpoles were now thicker — so I re-drilled the holes with a 3/64″ bit, which worked just fine.  The flag tank pennant and K.O. white flags can be placed in any tank.

And a super thing about the PSC model kits are all the extra little detail pieces.  From the Shermans’ bits, I’ve glued together several of the spare track links to make disabled markers to show thrown tracks.

Can’t wait til I have figures ready to really bring the team to life.
“Sensha, Go ahead!”