This month has seen mostly industrial quantity trimming and priming of chibis, but with some sporadic conversion work thrown in to keep myself more entertained.

First up, a batch of Impact’s Gnolls.  These figures took a lot of assembly work, but were incredibly worth it — they are soooo cute! ^,^  Way back in my D&D days  [White Box & AD&D], gnolls were really meh.  They seemed like filler on the monster tables that didn’t really offer anything that orcs didn’t already cover.  But as soon as I saw the artwork for Impact’s gnolls, I knew I had to get a horde of them.

The gnolls are multi-part figures, and are the most fiddly of Impact’s multi-parters to assemble.  Plus, I found it well worth doing some tweaking during the assembly process.  The torso comes in 2 pieces, split at the waist.  The 2 arms are separate and fit into open shoulder sockets.  The poleaxe piece has the 2 hands cast onto it.  Each hand has a nub on the back of the wrist, but there is no corresponding hole in the wrist ends of the arms.

For the torso, the original pose has the figure leaning forward.  If assembled that way, you would never see the [very cute] face during game play.  So I shaved the back edges of the waist joint to lift the upper torso so the face wasn’t turned downwards.  This is a simple fix if you do it before assembly.  I noticed the torso lean after I glued mine.  On spotting the then hidden face, I cut my torsos apart again and then did the shaving.  For each figure, the torsos are twisted in slightly different positions and shaved in slightly different places, so each one is in a unique pose.  Before going on to the arms, I filled any cracks in the waist joint with Testor’s Contour Putty and hardened it with a drop of Zap-a-Gap.  I really like the rabbelous horde look from all the poses!

For the arms, I drilled a hole in the end of each wrist joint so that the nubs on the hand pieces would have a place to lock in.  The arms are also glued in different positions on each model.  Sometimes, I’d widen out the shoulder socket to accommodate various positions.  I glued one arm into place on all the figures, keeping an eye on the having its wrist perpendicular to the line the weapon shaft would follow.  After those had dried, I glued in the other arms, again lining up the wrists.  The wrists didn’t have to be exactly lined up with each other, final corrections could be made with a bit of shaving and/or a bit of Contour Putty.

The poleaxe and hands took the most amount of work.  This weapon shaft as cast is very thin, and easily prone to breaking.  So I cut off the axe head, drilled a hole in the base of the socket, and glued it to a length of brass wire. Meanwhile, I left the hands temporarily attached to the middle length of the shaft, and drilled a hole through each hand.  It was easier holding the piece for drilling while the hands were still attached to the shaft.  After the holes were drilled, then the hands were cut away.

The really fiddly bit was gluing weapon, hands, and arms all together.  Zap-a-Gap takes a little while to set, which in this case was very very helpful. First slid one hand onto the shaft, the one closest to the head, and put a drop of glue into it, then dry fit the wrist joint and made sure the whole weapon was aligned the way I wanted it for that figure.  Then slid on the other hand, added a drop of glue to that, and then glued both wrists in place.  Working pretty quickly, making sure everything was aligned as nicely as possible, and trying not to glue my fingers to too many pieces at once, whee.

Finally sealed up all the joints with Contour Putty and hardened them.  The figure in the bottom right of the photo is the squad leader, holding the poleaxe in one hand and waving the horde forward.  As I mentioned at the start, very fiddly, but very worthwhile, I love these chibis:

The Impact Orcs were much simpler to assemble.  One-piece torso with arms, weapon & hands are a separate piece with the stock 2-handed weapons.  The hands did not have nubs on them, but they were [nicely] big and fat, so I drilled shallow holes in the wrist-end of the arms to help lock in the hands when gluing them in.  This also allowed gluing them at various holding angles, and touched up the wrist joints with putty.

The orcs are available with a variety of weapons.  The 2-handed axe and the 2-handed mace work just fine as is.  The polearms had very skinny joints at the head — I was planning on converting those to spears anyway, so it didn’t bother me that the polearm head broke off while I was trimming the mold lines off.  (Due to this problem, Impact has dropped this weapon option from the Orcs.)  Plus I did a few weapon swaps with weapons that came off other figures that are being converted.  The spear held in one hand came from a Monk figure.  One squad leader has a shortsword and axe, the other a shortsword and shield.  The shield is a Games Workshop one, with a bit of carving to make the skull on it look more chibi, and with the eyes drilled round, rather than the original angular and squinty.  Since the shield partially covers the face, I’ll glue that on after painting the figure.

Also show in the photo are other figures that also got primed in green: 5 One-Eyed Demons, a Medusa, and one of two Giant Flesh Golems (the other will be primed in brown, I’m doing them in War of the Gargantua colours).

All the large Type II figures from Impact’s first KickStarter were sculpted as super giant 60mm tall figures.  I would have preferred a number of them as not-quite-so large figures, ~30% taller than the adventurers.  For instance, I had been looking forward to getting a horde of Bugbears until discovering the figures would be the size of a Demon God of Bugbears.  Don’t really need a horde of those.  But, I can use 2 Demon God Brothers of the Bugbears and hope to someday find some more normal sized large chibi Bugbears for their congregation.

But 2 each of the Type II sized figures came with my two Queen Mo packages from the KS.  The Flesh Golems and the Bugbears are one-piece castings, so I’m just using my pair of each of those figures as is.  It seem worth the effort to slice and splice them.

But the others of the giant pieces were multi-piece castings which lent themselves much more nicely to swapping parts between the extras.

The 3-Headed Ogre (Giant) figure can be assembled with either 3 or 2 heads.  I made one of each, leaving the extra head to go onto a Troll Body.  To make the heights match better, I sawed a slice out of the Troll’s torso, and sawed off the big neck protrusion.  Then carved a notch to accomodate the Ogre head.  Also drilled a hole in each of these joints and glued in a small pin of brass wire for a secure joint.  Also carved the torso to trim down the waist and shoulders to make this one a female wearing a tunic:

For some quick conversion work, here’s a Fire Giant (Minotaur body + Troll head + Fire Whip from a Pit Lord), a pig-tailed Giant Troll (moved its pony-tail to one side, added the pony tail that was lopped off the Fire Giants’ head, and recarved the hair to match), and the assembled Giant (sliced & spliced Troll body + Ogre head):

And a stock Giant Minotaur and an Armoured Giant Minotaur (Pit Lord body & sword, Minotaur head & axe).  Not too visible in this photo, the carpace of the Pit Lord has been carved to look like armour that’s strapped onto the Minotaur: 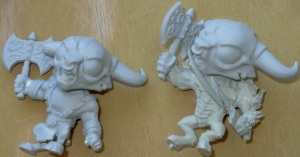 And now, a bunch of snakies.  The Giant Snake figures required a lot of fitting and puttying.  Due to this, they have been dropped from production.  But I am quite glad I got 4 of them with my KS order.

The figure on the left is the Snake Queen’s Consort (Snake Body + Pit Lord head & wings).  Next is the Snake Queen herself (Snake body with the Scorpion Queen head & torso); I’ll also do a stock Scorpion Queen as her sister later when I do up the horde of Giant Scorpions.  Then a Giant Naga (Snake body + Queen’s head), after a trip to the green-putty hairdressers — she needed a different styling than the Sister Queens’.  And a stock Giant Snake — I like having one of these in the super giant size, this is one worthy of facing Conan in a deep dark Stygian tomb.

Here’s a rearview, plus a Giant Snake head emerging from a wicker basket.  Not quite so visible in the photo is that the tip of the Consort’s tail was cut off and reglued  pointing upwards both for variety of snake posing and to make room for the wingtips:

And the final big figure conversion of this batch was to take a big figure and make a small one.  Stole this idea from the talented Nicholas Kelsch — I don’t need 2 Chthulu’s, so used the head from the extra one to make an Octopus.  Removed the tentacles, carved them to fit back on in mostly new positions, plus added 2 long metal ones (from the same figure that provided the tentacles for my Displacer Beast conversion.)  This figure stands up on 3 of its tentacles.  Used a large drill bit, just spinning it by hand to open up the mouth: 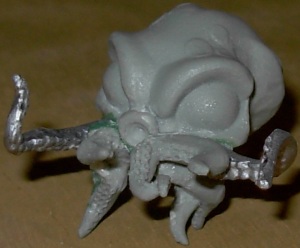 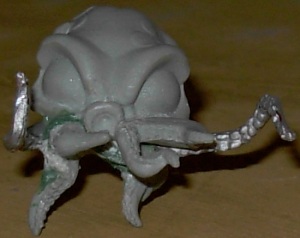 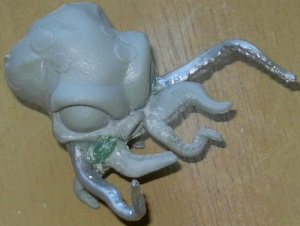 The boring industrial part of the work, lots of trimming and priming.   Here’s all the figures that got primed Light Gray, both Impact’s and Soda Pop’s from a set and extras from the Von Drakk expansion for Super Dungeon Explore I like the way a hint of the purple plastic shows through:

I greatly prefer working with the Trollforge resin of the Impact Miniautures than the soft plastic of the SDE expansions.  It’s always such a pain trying to trim mold lines of soft plastic, grr.  But really cute figures, so I’ll keep buying them!