The Islamic Emirate in Spain provides a colourful army, and a tactically much different one than its neighbors.  While technically not a part of the Hundred Years War, it is an enemy of the Kingdom of Castile and Leon which is a central player in that ongoing struggle.  Since I’m including all the Spanish Kingdoms as part of my larger campaign collection of HYW armies, Granada was a natural army to add in as well to complete the Iberian map.

15mm figures are nearly all by Essex, with many modifications.

Here’s the primary list of figure packs used.  There may have been some others added from other packs on hand, but I this list just about covers them all.  I made sure that no 2 figures in this army are in identical poses, including among the 20 crossbow figures.

*  The General figure is from (CRU2) Arab mailed cav, turban, spear & kite shield.  The original shield was carved down into a heart-shaped adarga.  The other 2 figures with the general I think came from the light horse packs.

*  Spears: (CRU6) Asst. Arab spearmen, kite shield.  Half the figures had their shields carved down to adargas, the other half received hand-made pavisses.

*  Crossbows: (CRU9) Arab crossbowman, (CRU27) Asst. Seljuq crossbowmen, (EMED19) Asst. Crossbowmen.  The Polish headgear on the EMED figures were carved into turbans.  The Essex crossbow figures have separate crossbows, and this is a very nice feature for making them all uniquely posed — it was simple to reposition the angle of how they are held.  Numerous head-swaps and varied turbans also added to the variety.  The figure kneeling with a crossbow was converted from a Corvus Belli figure of a knight kneeling in prayer.  Figures in hoods instead of turbans came, I think, from a pack of Medieval Peasants.

*  Extra adarga shields for conversions: (MS4) Medieval Spanish infantry shield.  Some shields had tassels added with a dab of Testors’ Contour Putty and hardened with a drop of Zap-a-Gap glue.

Many figures had turbans added.  Most were done with Contour Putty, some with embroidery floss, some with carving.

Spears are 1/16” brass wire with the heads hammered out.

The embroidery on the clothing and horse blankets was done with .005 Micron Art Pens.

The General, Kn/Cv, the banner is cut from the heavy metal foil of an empty tube of Contour Putty. 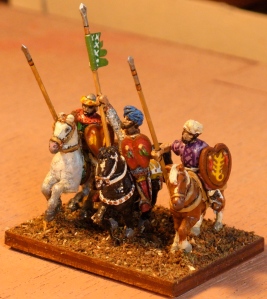 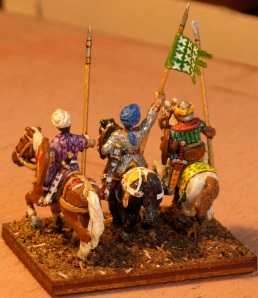 The Regular Foot: Mercenary Spears, Town Militia Spears & Crossbows with pavisses (pavisses are .030 styrene plastic with the rivets embossed by pressing the back side with an awl):

The market outside the city gate.  It is said that nearly every peasant in Granada owned a crossbow.  For those who don’t, the market offers a ‘1 DAY ¡SALE! CROSSBOWS’ on the day of battle.

This is the Sesame Street Gate of the city.  Brought to you by the letters C and D.  =^,^=

Bass wood was used for the base, city wall, wall molding, and gateway frame. Cobblestones were embossed into the wood by simply pressing and drawing with a black ballpoint pen.  The ink ran a little bit while painting the stone colour, which added nicely to the shading.  The gate itself is scribed plastic sheet.  The archway decorations are wooden letters from the craft store.

The marketplace pavilions were made from .030 sheet styrene.  After cutting the pieces to shape, they were very gently heated over a candle to make the wavy tent-sides.  Then they were trimmed a bit as need to fit, and after gluing together, any gaps were filled in with Contour Putty.  Spray painted the base coat.  After that dried, used a ruler and pencil to mark the edges of the stripes and drew in the edging with .005 Micron Art pens.  Then painted in the stripes between the lines.  Top surface embroidery was also done with the Micron pens.