Modelling work on the pile of AMT/ERTL Falcons continues, the conversion work on the YT-1200 is now completed and shown here.  The YT-1000 is very nearly done.  And work on the final 2 complete custom conversions is in progress.

First up, a little bit of easy re-working on the FFG Millenium Falcon.  Just recently poked at the upper gun turret, and discovered that it is easy to remove.  In its factory mounted position facing forward, it obscures the view port underneath it.  Sliding an XActo blade under the edges of the turret, it pops out fairly easily.  To mount it facing to the rear of the ship, simply extend the holes the turret’s pegs go into by carving with the aforementioned XActo blade.  Extend the holes towards the front of the ship until the turret fits into postion to match that of the rear-facing turret on the bottom of the model.  Put the turret back in with a drop of glue to secure it, and admire the lovely upper view port. 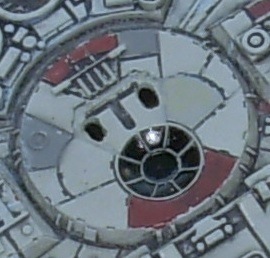 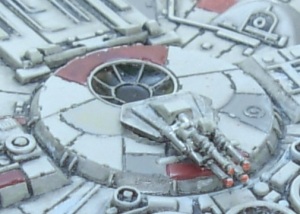 Back at the workbench, the YT-1200 conversion was developed from the Wookieepedia entry and additional illustrations revealed by some basic google-fu.

For this variation, the rear half of the original model was cut off and flipped upside down to provide the basis for the new upper engine deck.  During the initial slicing stage, the outer sides of the center ring on top and bottom were cut away, and the front mandibles and the lower portion of the center hull extension were removed.  The progress photo also includes the front end pieces that had been chopped from the 3-Z conversion — as I was considering various ways to proceed with the nose job on this one. 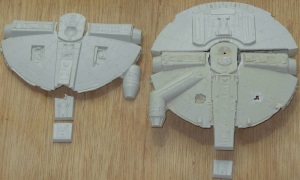 As with all these conversions, .040″ plastic strip was used to make a replacement side hull.  Bent by hand, then glued and clamped in place.  While there will be a gap in the front center, a single long piece was used in order to get an even matching curve across from port to starboard. 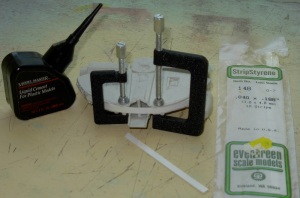 After that had set, the center front section was cut out, along with the original center alignment post on the inside; then the center hull plate cut, fitted, and glued into the larger recess. 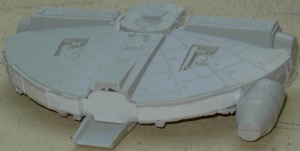 Then much modelling ensued.  Fun was had with carving, green putty, and contour putty.  Engine nacelles, long sensor boom, and a few minor greeblies provided from the bits box.  Central engine rims added with .040″ half-raound strip.  The distinctive shape of the boom was made by cutting apart a long antenna piece and drilling and gluing in a bit of brass tube.  More strips of plastic were glued inside the front hull extension to extend it even longer and provide an attachment point for the additional piece taken from the bottom, then an additional piece cut from .030″ sheet was fitted across the whole extension to thicken it up a bit. 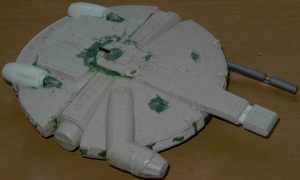 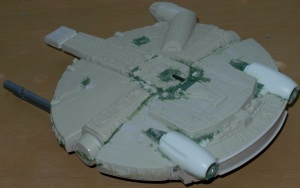 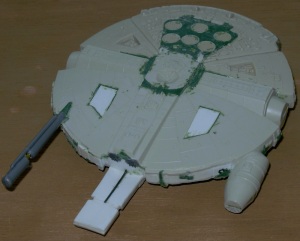 This ship has a bottom turret, which I may or may not model.  It would go right about where the mounting for the stand will connect and not particularly visible during gameplay.  Once I have the stand mounting detail worked out, I’ll consider whether or not to retrofit the turret.