Stands for the Locks & Ions

Just finished the first big wave of basing the Target Locks and Ion tokens, and doing some re-painting to streamline the target lock mechanics.

Began by hunting around for sources for small plastic stands that could hold the thick cardboard tokens upright.  This makes it a lot easier to place and remove tokens from the stand of the target ship during play.  I only found 2 sources with the sort of plastic stands that I was looking for — both in the UK.  They needed to have a slot wide enough to hold the thick tokens, and have a small enough base to easily balance on top of a ship’s flight stand.

BoardGameExtras has a perfect sized stand, 18mm x 10mm oval.  But it only comes in 4 colours.  I could have spray painted these to make more colours. But went with option two instead.

EM4 has 20mm round stands that come in 10 different colours, inlcuding clear.  These are also half the price of the oval ones; and since I was ordering enough of them for big fleet scenario use, the price-savings was worthwhile.  With a bit of chopping, they can be brought down to a better size.

Both of these style stands have some plastic nubs inside their slot.  These need to be removed to hold the thickness of the X-Wing counters.  My favorite heavy duty cutting blade, an X-Acto #16, removes the nubs quickly and easily.

For chopping the stand down to size, I put them on The Chopper — a super cutting tool usually available through model railroad suppliers.  It’s a razor-blade set into a cutting arm, with guide widgets that can be set on the cutting board.  The first sets of bases I cut down to ~13mm wide.  Then switched to ~10mm wide.  After chopping, just take a file and smooth over the cut edges.  They all stand up just fine with a token in them, and balance very nicely on the flight stands. 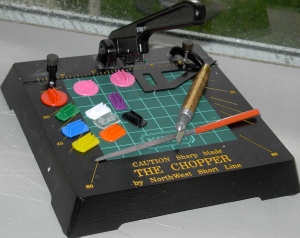 Next step was to repaint all of the target locks for a more streamlined way of using them.  Each ship already has number ID tokens on the stand and a corresponding number token on the ship’s card.  Using blue and red target lock tokens adds an extra ID token which is not needed in most circumstances (some sets of blue & red target lock ID’s will be needed for Col. Jendon piloting the upcoming Lambda Shuttle since he can shift the blue target locks to other friendly ships).  But otherwise, ships do not need both a number and a letter ID.  Changing target locks to numbers, or changing ship ID’s to letters, removes the duplicated tokens.

For my small fighters, I’ve repainted red target locks with numbers.  The colour stand the target lock is in indicates the associated ship type.  I’ve used red for X-Wings, yellow for Y-Wings, orange for A-Wings (since changed to Green, the Orange and Red are hard to tell apart in some lights), Blue for future B-Wings, etc.  Black and purple are for Imperial use.  Pink for Pirates.  Clear for Ion tokens.  Each stand colour can also be used for multiple ship types, and I can double up as needed for expansions in the far future.

I try to keep the Target locks’ number range from 1–19 to keep the fonts larger and easier to read.  Going into the 20’s uses two wide characters and requires a slightly smaller font size.

With the parts from many Core Sets, I have buckets of number ID’s 1-9, but not so many 10-12.  This shortage is easily rectified by painting a second digit onto extra tokens!  8 becomes 10, 1 becomes 11, 2 becomes 12.  The darker orange set at the top of the photo was then coloured with an orange Prismacolor marker, and the lighter one with an orange highlighter.  They’ve both been sprayed with a light coat of Dullcote to remove any shine and to keep the highlighter from rubbing off on my fingers during gameplay.  The as yet uncoloured ones done will be done blue later.

In this photo, X-Wing Red 1 and A-Wing Orange 7 have locked onto a TIE, which also has an Ion token.  Y-Wing Yellow 1 does not have it’s target lock out on an opponent.  TIE Advanced Black 13 has locked onto the X-Wing. 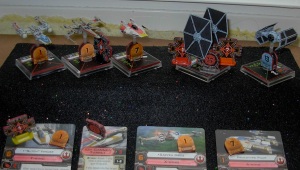 It took a game or two to get used to the new system — I had to learn to remember that ships that do not have their target lock sitting on their card have it out on a chosen target rather than looking for the blue target lock on the card!

Just for extra flair, I’ve coloured in the border lines on the locks with a magic marker to match the colours I’ve used on the number ID’s — orange for Rebel, blue for Imperial, (and green for Pirates).

To expand the range of available ID’s, I’m using letters for the big ships instead of numbers.  I’ve redone the letter tokens so they have the same letter on each side, and made them in sets of 3 blue and 2 red tokens of each letter.  The 3 blue tokens are used instead of 3 number ID tokens: 2 on the ship’s stand and 1 on its card.  There are 2 red locks for use on any ship that takes a Weapons Engineer crew upgrade.

Here we see Han and Boba have locked onto each other, and Boba’s Weapons Engineer still has an unused 2nd red target lock. 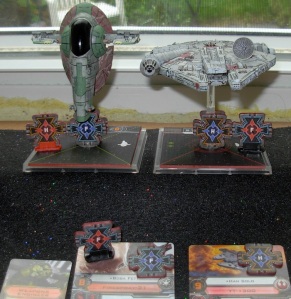 I’ve tried a couple of different techniques for redoing the lettered locks.  The simplest way is to just repaint one side to match the other side.  Fortunately, some of the existing double-sided combos are easy to modify. The E/F, G/H, I/J, K/L ones for instance are easy to repaint one side to match the other.  I’m not using the letter S since that can easily be mistaken for the number 5 from across the gaming table.

The much more fiddly way (but may be handy for folks who can’t paint letters very easily), is to physically cut the tokens apart and then glue the matching letter halves together.  The best way to do this is to separate one edge of the lock with a sharp X-Acto blade, and then peel the halves apart.