Army List (2nd edition) I/28 Sea Peoples 1208–1176BCE: 1xLCh or 4Bd Gen, 2x4Bd, 6x3Bd, 3x3Ax or 2Ps. I/29 Philistine 1166–600BCE (a) 1166–1100BCE:  1xLCh Gen, 1xLCh, 6x3Bd, 2x3Ax, 2x2Ps. (b) 1099–600BCE:  1xLCh Gen, 1xLCh, 6x4Sp, 2x3Ax, 2x2Ps. Background Sea Peoples — Aarrr!  Driven to sea by the Hittites, they landed on the shores of the Levant and fought to establish a land of their own.  They fought many battles with the 19th Dynasty Egyptians, were eventually defeated by Ramses III, and resettled into Canaan.  This was possibly the roots of the Philistines.  There are linguistic hints about the origins of both peoples, but the full and precise details are lost in the mist of time and tide. Figures 15mm figures, mostly Old Glory.  The boat is Essex, as are the Spear figures for the later Philistine army (not shown here yet, they are currently winging their way across the Atlantic and will be painted after arrival). The original painting on the Old Glory figures was done by Paul Potter, commissioned by one of our local club members who was then selling excess armies, and I bought this one.  Paul uses a black undercoat and a very fast and wet painting technique with very quick and very decent results.  I did some touch up on these to brighten the paint and crisp the lines.  This army had also originally been mounted on metal stands, and I cut the figures off those and mounted them on my preferred Litko bases.  Some of Paul’s flocking was carried over during this process, then I added my own flock and ballast mix to finish up the stands. The Chariots, as well as touching up the paint I added reins with strands of thread and drilled out the drivers’ hands to hold them.  A lot of fiddly work with tweezers getting the reins all in place: 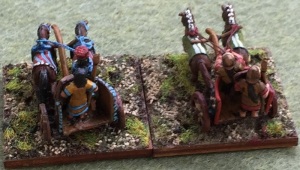 The 4Bd, chieftains and retinues, I drilled out the opening of the horn for the command stand:

The 3Bd,  common warriors, each stand with monochrome helmets to easily distinguish them from the 3Ax during gameplay:

The 3Ax and 2Ps,  javelin armed light troops, the Ax stands have mixed helmet colours to easily distinguish them from the 3Bd during gameplay:

The Boat Camp, I drilled out the crow’s nest and added rigging with thread.   More fiddly tweezers work!  Any of the excess optional stands from the army can be used as Camp Followers.  This boat can also be used as the away camp for any of the coastal armies of the Chariot Age: 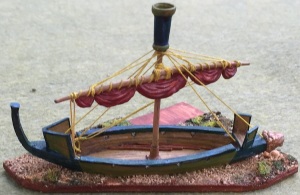 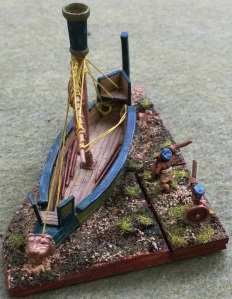 And the Army Host assembled (Spear option to be added later): 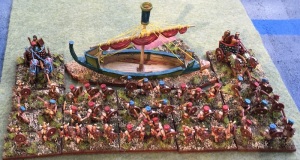