How To Fix the Lambda Shuttle

And fix it good!

*  Spring the trap with a massive alpha strike.

*  Drive the crippled shuttle into an asteroid and watch as a wing rips off and then the cockpit snaps away, tearing through the top fin as it goes.

*  The battered and broken pieces will not be entirely lost in space.  Interested parties will soon return to search the compartments of the wreckage in hopes of finding a vital data card that was being carried by one of the passengers… 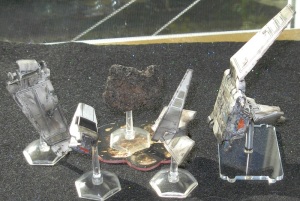 The new FFG Lambda Shuttle model has some technical problems in its first production run.  Out of the box, the wings don’t fold all the way down.  The pivot points of the joint are gummed up with excess thick paint.  Extra plastic on the parts where they were snapped off the sprue before assembly may also be contributing to the problem. And there just might be design problems.

The problem can largely be fixed by forcing the wings down with steady heavy pressure.  This plastic is fairly flexible, and the stuck parts are thick enough plastic that they are relatively unlikely to break while doing this.  When the wings have been forced nearly all the way down, they can be seated all the way by holding both wings at the rear and near the fuselage and giving them a hard pinch together.  Once the wings have been forced down, they can fold up and down regularly afterwards.

The ship on the left shows the maximum depression out of the box, the right one after forcing the issue:

But after that, a lingering problem remains.  When the wings are in the down position, a gap opens up in the side of the fuselage where the mis-fit inner workings are still gumming things up:

In the photo above, the one on the left has not been forced down yet.  The one on the right is in the down position.  Fortunately on this particular model, it is not much of a gap and only noticable up near the front wing guns.  So I have left that one alone and will use it as is.

The one on the left however, did develop a much larger gap all along the side after I had forced those wings down.  That one was jammed up withmore paint and/or sprue remains on the inside.  So with that model, I decided to pry it open to carve and fix the problem areas.  After quite a lot of effort, it was clear that this model was not going to pry apart.  The pegs inside were too tightly glued and/or gummed with paint.

I did get it mostly pried apart, and with many portions of the fuselage bent out of shape.  (Hence I can assert that it is a fairly flexible and strong plastic, not easily prone to breaking!)  But eventually it became clear that it just was not worth the additional effort to take it fully apart.  And in it’s current state, I could have still returned the model to an intact state by bending the parts back, gluing, and clamping.

But looking at the pieces, I decided to go for the full ‘fix’.

This decision may have been influenced by the fact that all during the time that I was working at prying apart the fuselage, I was watching an old (and superb) ABC Movie of the Week on UTube that I hadn’t seen since it’s network premier: Lone Survivor

Battle damage was added with X-Acto knife and pin vice.  One wing was just wiggled out of the pried-open fuselage.  The fin parts and cockpit were scored and snapped off.  Part of the fin piece and wingtip were scored and just bent a bit.  The fuselage around the remaining wing was bent back, glued, and clamped.  That wing itself glued in postion too, and putty added to fill the gaps within its hinge mechanism.  Everything was blackened with quick passes through a candle, being careful not to burn or melt the plastic.

Some painting for a bit more weathering and detailing.  Happily, there is molded-on detail on the connecting surfaces of the cockpit and fuselage!  Painting the safety doors between the cockpit and passenger compartment orange gives a nice spot of colour. 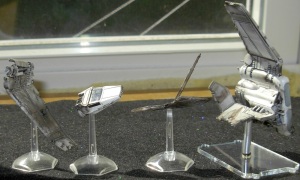 On the main body of the shuttle, carved a notch to fit a 6-32 hex nut, and epoxied one of those into place — this fits on the metal post of a CorSec flight stand.  Well, it doesn’t so much fly as drift through space ^,^